Gaia Sophia Temple of The Heart

Devoted to the Healing & Restoration of the Sacred Feminine, Mother Earth & All Beings…

A voice for the Mother

We are in deep gratitude to the amazing artists and photographers who have allowed me to feature their art here on this site, and for their profound gifts that bless the world with so much beauty, depth, richness and inspiration.

We thank and honor the following artists for their contributions to this website and our earth: 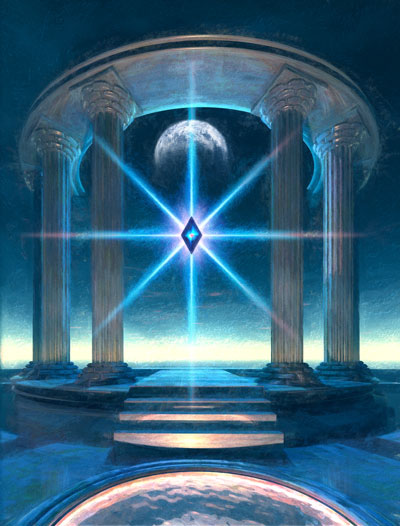 Scott Grimando is an artist whose work includes the cover of Hannibal's Children. Grim Studios offers a Broad Range of Creative Services drawn from 20 Years of Professional Experience. http://grimstudios.com

Art of the Soul ~ Pamela Mathews 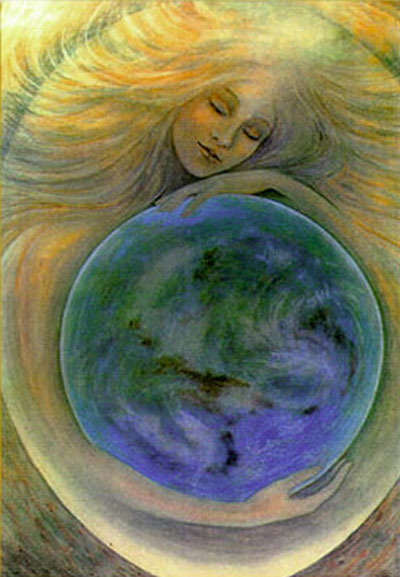 From an original painting by Pamela Matthews – “Sophia” is one of 28 faces of the Goddesses-of-the-New Light – A Goddess-a-Day Divination Cards which may be seen on her website: www.grail.co.nz

After experiencing an epiphany while walking alone on a beach more than 40 years ago, Pamela paints spiritual, sacred and visionary images which are widely reproduced and may be found in ashrams, retreats, yoga, meditation & healing centres as well as private homes all around the world.

The Goddesses-of-the-New-Light divination card pack remains in strong demand, and the deck of Tarot cards commissioned by the UK-based international Aura-Soma organization recently went to a fourth printing. The deck is both traditional and contemporary: it is dynamic and currently contains 112 cards with more Archangels added in each year.

You can view Pamela’s beautiful work at: https://www.grail.co.nz 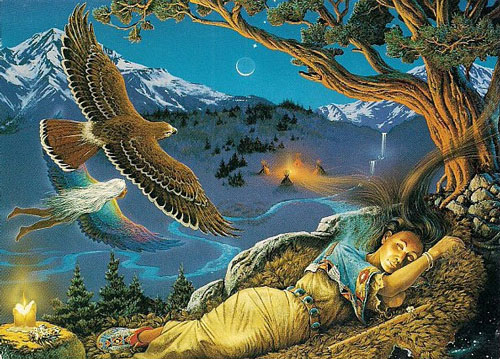 Wings of a Dream by Charles Frizzell: frizzellstudios.com

Born 1944 in western Kentucky, Charles Frizzell has been creating artwork all his life. After graduating from Murray State University in 1967 with a B.S. in Fine Arts, Frizzell headed west, settling in Colorado in 1969. He now lives and works in a small central Colorado town noted for its artistic atmosphere, the Royal Gorge, and the Arkansas River. Charles has out-the-door access to some of the most beautiful scenery in Colorado, as well as the Arkansas River and the Bighorn Sheep canyon.

A member of the International Guild of Realism, Frizzell's art is collected internationally, and the list of honors and awards he has received in regional and national exhibitions is extensive. He has been honored with many solo exhibitions in galleries throughout the southwest, as well as participating in numerous group exhibitions. His work is in the permanent collection of the Colorado Springs Fine Arts Center, and in the Francis S. King Collection of Western Art at the Pueblo Fine Arts Center in Pueblo, Colorado, where he was also invited to hang a solo exhibition.

He is very versatile with style, subject, and media, and although he continues to work with oils on canvas, many of his recent paintings are rendered in acrylics on stretched canvas or prepared panel. He also works with watercolors, pen and ink drawings, graphite drawings, lithography, and a unique mixed media on illustration board. His realistic landscapes reflect his love of and concern for the earth, as well as the changes made to the natural environment by mankind. His mystical figurative images of Native American people have been collected worldwide and published on calendars, note cards, books, CD covers, puzzles, and collector plates, as well as limited edition signed prints and posters available through Frizzell Studios and the galleries which represent his art. His works of fantasy and mysterious lands and figures have opened new avenues of subject matter, and are presented with an authority and a realism to be plausible to all who have had dreams and visions of other realms.

You can view and purchase the amazing Artwork of Charles Frizzell at: frizzellstudios.com

Art of the Josephine Wall 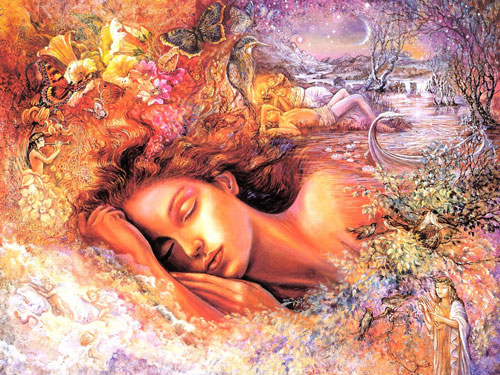 From childhood Josephine has had a passion for light and colour, fantasy and visual story telling. The life of a painter was clearly her destiny! Enchanting and detailed images flow freely from her imagination in an endless cascade of ideas. Her first employment after leaving Art College was at Poole Pottery, where she painted the dynamic and boldly coloured designs of the now famous Delphis ware – very collectable and realising high prices at specialist auctions.

She lives contentedly with her husband at Wisteria Cottage' where she works in a purpose built attic studio. The walls are covered with a huge wisteria, cascading gorgeous flowers - hand painted of course. Josephine is convinced that working under the pyramid shaped roof is a source of inspirational vibes, aiding her creativity! The rest of the cottage also displays her artistic nature, a woodland scene and butterflies in the kitchen, flowers and birds on the furniture and even more wisteria on the glass doors in the living room. Even the garden doesn’t escape her touch, as she likes nothing better than to spend time designing unusual features and creating an abundance of colour, with a slight bias towards a Victorian style.

In addition to her main love of painting, she directs her creative energies into pottery figures, sculpture and reproduction stained glass panels. She has even customised items of clothing.

To view Josephine’s beautiful and magical paintings please visit her at: http://www.josephinewall.co.uk 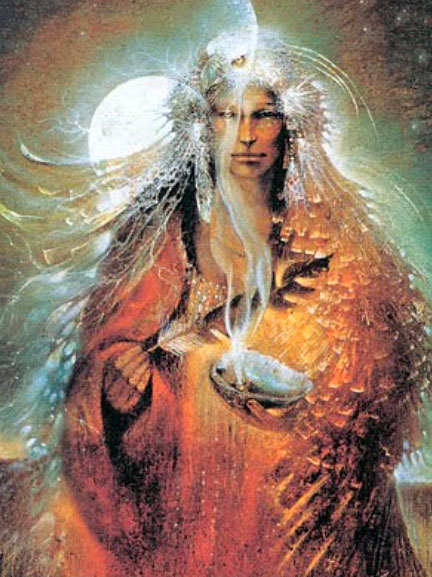 I had the profound blessing to actually meet this beautiful artist in person years back in the 90’s while living in Mill Valley, CA. Her mystical and shamanic art was a featured artist in a gallery near our home. I will never forget this day and being in the presence of her and her mystical art. I was in deep awe and she was the most soft-spoken and humble being, so beautiful she was. I was sad to hear of her passing and many of her prints bless the walls of my healing space.

Susan Eleanor Seddon, a noted San Fransico Bay Area artist, was born in Brazil in 1941, of English parents who had emigrated from South Africa. Her early work was clearly more light hearted and simpler in content than later work. Portrayals of medieval figures and fantasy characters, appearing in rainbow bright colors, predominated her early work but evolved into a more complex layering of the anthropomorphic images of animals, Shamans and Goddesses. Working primarily in French oil pastels, inks and occasionally pencil, she developed a distinctive personal style characterized by the use of color applied in layers from which dream-like forms emerged. She drew her inspiration from a wide variety of sources: mythology and poetry, Jungian psychology and worldwide spiritual traditions, as well as a deep love of animal and the natural world. There is a fairy tale quality to her work, a sentimental recalling of childhood dreams of fairies and castles and magic. Her art exerted and continues to exert a profound influence on the lives that it touches.

The artist took great pleasure in being present when her paintings were shown, and those that met her, however briefly, were invariably deeply touched by her empathy, warmth, gentleness, modesty and charm. 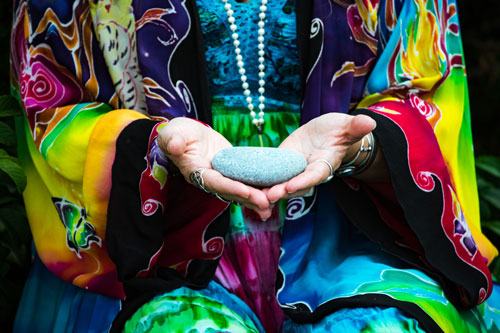 I appreciate the beauty of this planet. I am a Soulful Seer and want to help you open your lens of love. I am an intuitive photographer, who trusts my own natural instincts to capture the perfect moment through the lens. For more than a decade, I have attended intuition, meditation, yoga and energy workshops/retreats. I strongly believe that by allowing the laws of nature to flow through us rather than resisting them, we can connect, to the present, where infinite possibilities are at our reach. By observing the world, how animals interact with one another, the motion of the waves of the ocean, the changing of the seasons and all that happens naturally, we have the same capacity within ourselves to be part of the natural world. Letting go of our own emotional drama and self-imposed limitations will help us to deepen our own love vibration to live our lives in accordance to the laws of nature and create the space for inner peace and a much more abundantly filled lifestyle.

You can contact Christine or view her photography at: www.christineanuszewskiphotography.com

Gaia Sophia
Temple of The Heart

Together we are healing & transforming our planet from the inside out! 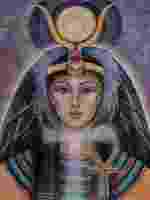 You are not alone beloved sister…
We are ALL in this together.
Join a Sacred Circle of Wise Women Sisters  on a deep and powerful journey of Descent,  Healing, Transformation, Empowerment,  Liberation and Ascent…

As we journey through 18 Moons  and a complete cycle of Venus together.

You are not alone beloved sister…
We are ALL in this together.
Join a Sacred Circle of Wise Women Sisters  on a deep and powerful journey of Descent,  Healing, Transformation, Empowerment,  Liberation and Ascent…

As we journey through 18 Moons  and a complete cycle of Venus together. PORTALS of HEALING & TRANSFORMATION: Part One
View all

WE BOW TO THE DIVINE WITHIN YOU & WITHIN ALL OF LIFE